Addictions Come in all Shapes and Sizes

When we think of addictions, alcohol, illicit drugs, prescription drugs, etc. come to mind. On television in the last two weeks, the themes of several TV drama series have focused on the opioid epidemic that was started by doctors prescribing opioids to patients who had pain and eventually got hooked on the drug. We hear of individuals shooting up and dying from overdoses. But addictions also come in various other forms.

I never thought that addictions were part of my life until recently. Over thirty years ago, we went into Gene’s Boot Store In Flagstaff, AZ and I bought my first pair of brown lizard boots. I still have that pair of boots, but they have become too small and I have subsequently given those boots to my youngest daughter. If only that was the end of the story. I went back to Gene’s and he had a pair of light tan ostrich boots with the ostrich going all the way up the boot. My second pair of boots.

Long story short, I have 12-13 pair of boots ranging from ostrich leg to hippopotamus, gator belly to American alagator, sting ray to shark, python to rattle snake. I have a weakness for boots I have to admit. I am addicted as these are only a portion of my collection. 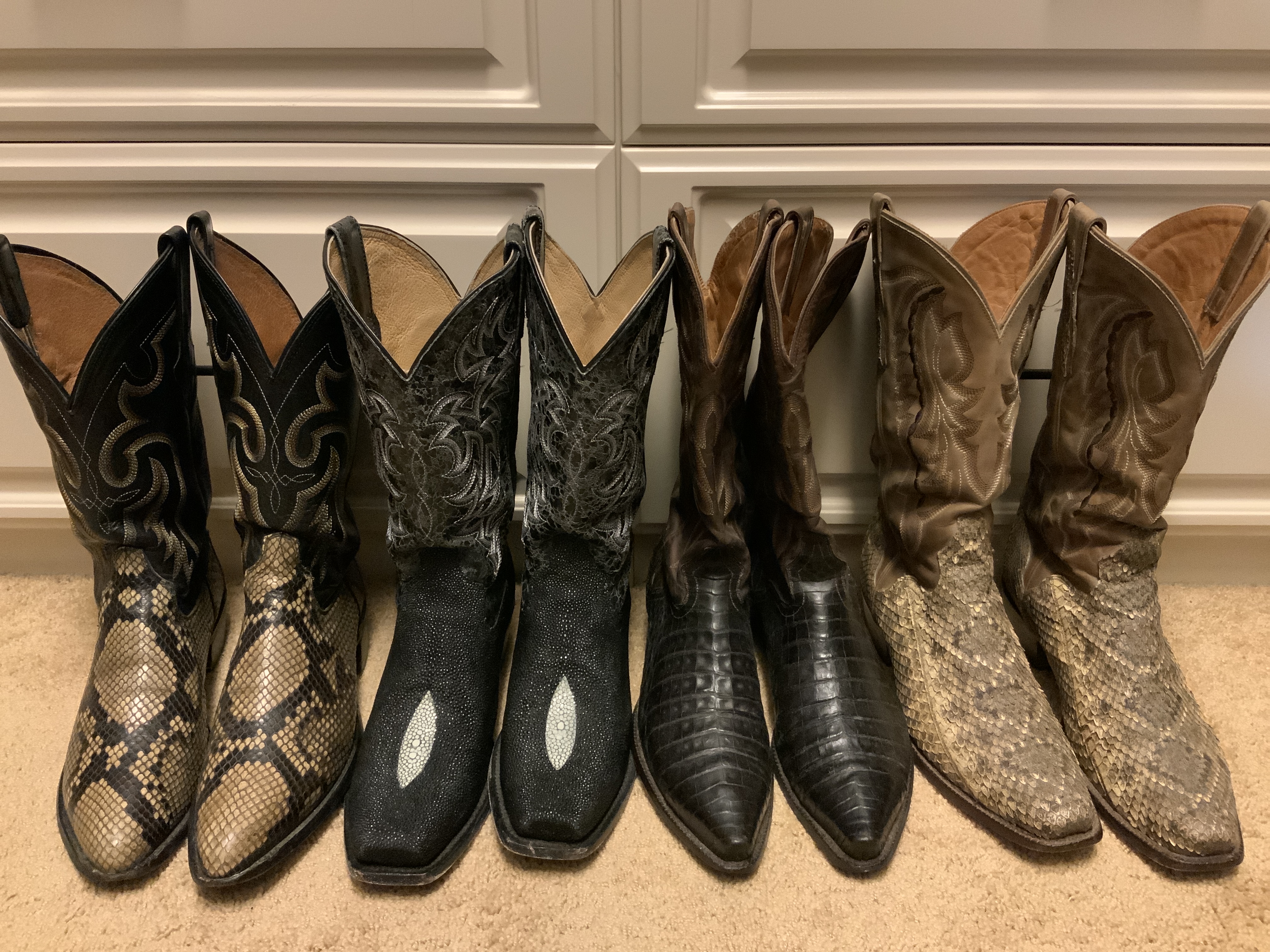 I was telling one of my relatives of my addiction for boots and she informed me of her addiction for earrings. I asked her how many pair of earrings she has and she couldn’t count them. She told me that she found some that she had never warn but had but them in her jewelry chest and had forgot them. It could be shoes as in the case of Ameldo Marcos, wife of former Philippine president who had 6000+ pairs of shoes.

Addictions happen when we find ourselves being unable to say no to whatever is before us and we become weak in the knees to set limits or boundaries. I was reading about a Judge over Israel who had an addiction for women who’s name was Samson.

“He went back and told his father and his mother, “I have seen a young Philistine woman in Timnah. Now get her for me as a wife.” But his father and mother said to him, “Can’t you find a young woman among your relatives or among any of our people? Must you go to the uncircumcised Philistines for a wife?” But Samson told his father, “Get her for me. She’s the right one for me.”” Judges‬ ‭14:2-3‬ ‭CSB‬‬. “Samson went to Gaza, where he saw a prostitute and went to bed with her.” Judges‬ ‭16:1‬ ‭CSB‬‬ “Some time later, he fell in love with a woman named Delilah, who lived in the Sorek Valley.”
‭‭Judges‬ ‭16:4‬ ‭CSB‬‬

All of us have our addictions. Succumbing to those addictions have negative consequences associated with our choice to say yes. We first have to understand that we have an addiction and be willing to set up healthy boundaries to stay away from the temptation. On this journey, all of us are or will be tempted with something or someone in our lives. Turning to the Lord to gain insight and guidance can prevent a lot of emotional, physical, and relational pain.

I am happily married to Nadine, a person I've known for 20+ years. She and her late husband owned Airpark Auto Service where I took my car for years. Four years after my wife died we began dating and the rest is history. We have a blended family of 6 children between us and love visiting them across this country. We recently had our third grandchild between us. We love to hike, bike and ski. I am a psychologist and do relational life coaching for marriages and families primarily. I love what I do and never get tired of seeing marriages and families move to more healthy places in their lives. Five years ago my oldest daughter Deborah encouraged me to begin writing my thought into a blog I call my Jlog (Jim's log). I have become more and more passionate in connecting everyday experiences to spiritual truths. I hope that as you read my Jlog, you will gain insight into your personal life and experience true growth in your personal and relational life.
View all posts by James Gorton →
This entry was posted in God Relationship. Bookmark the permalink.