Greatest in the Kingdom: Part I

I was listening to talk radio the other day discussing the differences between the USA and England.  It’s obvious that we don’t have a monarch and that England does.  When any of the key players in England’s monarchy are in the news, we rally around it and see the events of a wedding, a birth, an engagement of the monarchy.  We are intrigued by the pomp and stance of each occasion as we are glued to the TV.  So if we were to ask who is the greatest in the kingdom, many would say that the Queen Elizabeth II.  The answer to this question would focus on all those who are connected to the family tree:  Prince Charles and his two sons, Prince Harry and Prince William (the most famous of the family tree); Princess Ann, Prince Andrew, and Prince Edward.  Those who have a prince or princess before their names are much greater in the kingdom than those who come after.  Who is the greatest in the Kingdom?  An interesting discussion.

But there was a kingdom talked about way before England ever got its start.  It was the Kingdom of God written 2000+ years ago and had its existence way before any kingdom on earth existed.  So who did God’s kingdom purport as the greatest person in its kingdom?  The priests?  Pharisees?  Sadducees?  Prophets?  Kings of the Old Testament?  Jesus disciples?   Actually none of these.  Jesus’ disciples were asking this question and Jesus gave a very interesting answer.  “At that time the disciples came to Jesus and said, “Who then is greatest in the kingdom of Heaven?” And He called a child to Himself and set him before them, and said, “Truly I say to you, unless you are converted and become like children, you will not enter the Kingdom of Heaven. Whoever then humbles himself as this child, he is the greatest in the kingdom of heaven. And whoever receives one such child in My name receives Me;” Matthew 18:1-5

As I look at my grandsons below, I am reminded by this passage that God is more concerned about our heart than what we know or what our name is or what our position is in life. 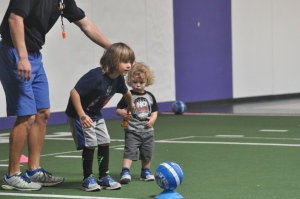 They are only focused on one thing at a time and have no cares or worries about life.  For Greyson, he was only focusing on water and experiencing the joy of God’s creation–blue water.  Brayden and Keaton were focusing on kicking the soccer ball and nothing else.  Simple faith.  No worries.  Basking in what God has created.  Being a child in our perspective as we go through life is the steps to becoming great in His kingdom.

On this journey, today might be a good time to begin cutting away the pride and junk that wraps itself around our minds so that we lose sight of being humble and childlike.  It’s not too late to start this wonderful journey.  You experienced it once and can begin to do so today.

I am happily married to Nadine, a person I've known for 20+ years. She and her late husband owned Airpark Auto Service where I took my car for years. Four years after my wife died we began dating and the rest is history. We have a blended family of 6 children between us and love visiting them across this country. We recently had our third grandchild between us. We love to hike, bike and ski. I am a psychologist and do relational life coaching for marriages and families primarily. I love what I do and never get tired of seeing marriages and families move to more healthy places in their lives. Five years ago my oldest daughter Deborah encouraged me to begin writing my thought into a blog I call my Jlog (Jim's log). I have become more and more passionate in connecting everyday experiences to spiritual truths. I hope that as you read my Jlog, you will gain insight into your personal life and experience true growth in your personal and relational life.
View all posts by James Gorton →
This entry was posted in God Relationship and tagged Childlike faith, Greatest in the kingdom, humbleness, Monarch. Bookmark the permalink.